I started this blog some time ago with the idea that it would become a repository for many of my recipes in an effort to get them to be a bit more organised rather than a notebook filled with ripped out pages from magazines, print outs and newspaper clippings. I never really got started with the blog as I intended, but this year I’ve decided I’m going to use it a bit more, but in a slightly different way than what I had originally thought.

I’m not usually one for New Year’s resolutions as such, but I do like to think about things I would like to achieve over the following year. The last couple of years I have stuck with the aim of trying to learn to cook at least one new recipe every couple of weeks. In reality there were some times that I did more than this, and some times less – overall I wanted to try and expand my culinary repertoire by about 25-30 dishes in the year. I’m pretty sure I’ve done this although I haven’t documented it. 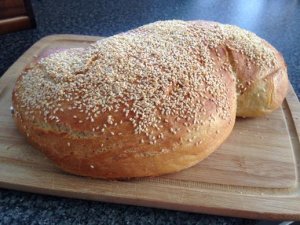 Sicilian bread recipe I tried in 2015.

Cooking for me has become an activity to escape from work. I find it very difficult to switch off from work and disengage with what I have been working on in the day. Cooking forces a bit of a break because it makes me focus on something different. During my PhD studies baking became my escape activity, and I often joked that the more elaborate the baking was, the more stressed I was. One time I made a pirate ship cake – needless to say this was not a happy week in the office. But anyway, I realised that time in the kitchen was ‘down time’, and the bonus also being that we had nice things to eat. 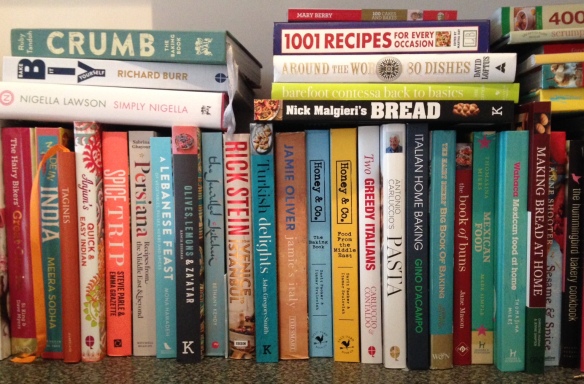 It’s been in the last few years though that I’ve realised cooking more generally helps me relax, whether it’s baking bread, making ratatouille or attempting to make my own pasta. It’s also become something my husband (also an academic) enjoys too, it take us both away from the computers as we can plan things we’d like to cook, head into the city to get ingredients (we are lucky in Coventry to have such a great market) and then spend the time together to make whatever dish we’d selected. Over the years I’ve ended up with quite a large collection of cookery books, not to mention piles of recipes from magazines and the internet. I want to make more of an effort to use them, even more than I have been doing. At the same time I’ve become a lot more adventurous with food, and want to find out more about different food cultures, cuisines and ways of cooking.

So for 2016 I am going to set a goal to cook a new dish from a different country every week. This was also in part inspired by a podcast I heard last week about Ann Morgan who set out to read a book from every country in the world in order to expand her literary horizons beyond the familiar western world. You can listen to a TED talk about her literary adventures here. While I am not going to try and cook something from every country around the world in a year I am going to try and make sure I vary the countries I explore the food cultures of. If I can cook something from at least 52 countries over the year I will be happy. I have ordered myself a world map pin board and will keep this in the kitchen as reminder of the countries I have ‘tasted’.

Now I realise that one dish cannot represent a whole food culture. But this is not an attempt to know everything about every food culture, but instead an attempt to expand my horizons a little, provide encouragement to try new ingredients and recipes. The dishes I cook will take inspiration from different countries over the year – I say ‘take inspiration’ rather than ‘provide authentic tastes’ because it might not always be possible to make dishes as authentic as you would find in the countries themselves.

Each week, there will be a blog post to explore what I have cooked, and a little of what I have learnt in the process about cooking, ingredients and food cultures. Hopefully this time next year I’ll be able to look at a map with lots of pins and I will have a much greater appreciation of what the world has to offer.